A Special Council Meeting on “Reimagining Public Safety” will be held THIS EVENING at 6 p.m., and the City Council is poised to take action to give the City Manager direction on how to proceed.

The number of initiatives under consideration are so numerous and their scope so vast that it would not be possible for me to explain them all to you here succinctly. The agenda for tonight’s meeting alone is 2,100 pages long!

You can read about some of the key initiatives in Berkeleyside including:

The Mayor has authored a proposal that includes many other components, including various investments in community-based organizations, the establishment of a Department of Community Safety, and civilian responders for low-level calls for service, among other initiatives.

I have serious concerns about whether it is realistic for a City of our size (or any size, for that matter) to take on this many public safety initiatives at once, and to do any of them well. As always, my approach is to prioritize the most pressing concerns and to do so in a fiscally responsible manner. I remain committed to the vision of reimagining public safety—that all members of our community, especially people of color, feel safe when they interact with our City’s emergency responders.

“We Need to Do Both”

At a Special Council Work Session Discussion on Reimagining Public Safety last month, I spoke about the need to restore police positions that continue to be under a hiring freeze (implemented in FY 2020-21 to close a $40 million deficit caused by the pandemic), while also continuing to pursue high-priority Reimagining Public Safety initiatives. My perspective on the importance of restoring police positions is informed by several factors:

Our police department currently has 152 sworn officers, a historic low. 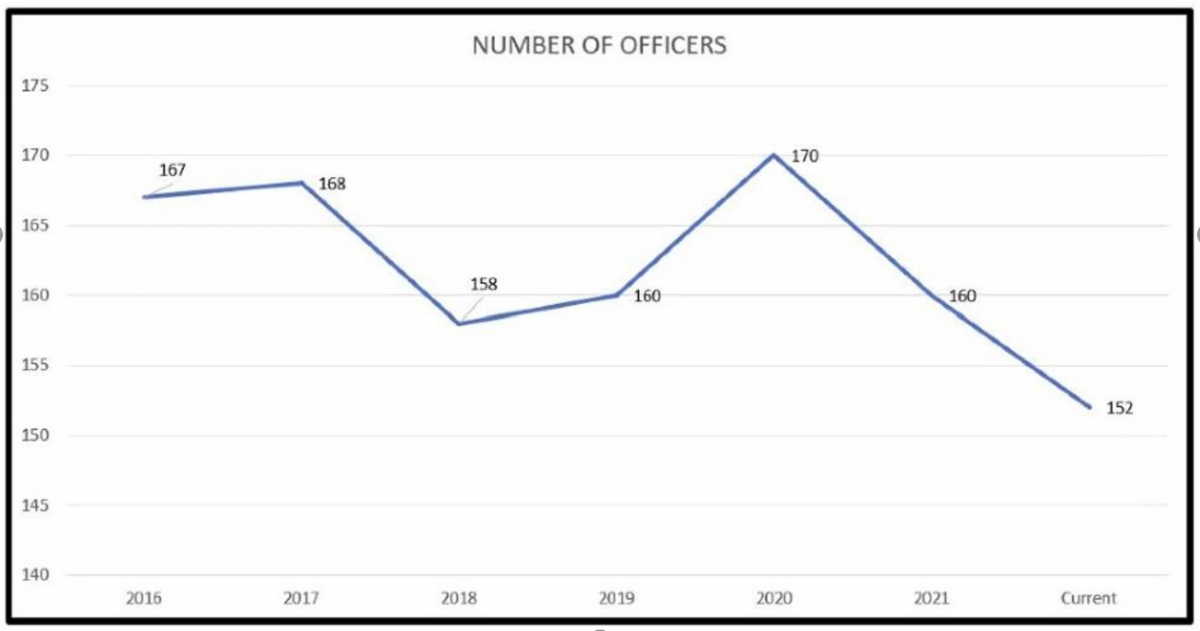 Given our crime trends and this historically low police staffing level, I think it’s an appropriate time to restore some of the positions that have remained frozen for two fiscal years and conduct a staffing and beat analysis study to inform future police staffing changes. Under the current beat structure, officers are assigned to different areas of the city with boundaries largely determined by the number of calls for service in each beat, but the beat analysis could inform a shift to a broader “sector” system that would use data about crime trends to focus resources differently, according to prior Police Chief Greenwood.

I have co-sponsored with Councilmembers Terry Taplin and Susan Wengraf an item from Councilmember Lori Droste that I believe strikes an appropriate balance between restoring police positions and pursuing high-priority Reimagining Public Safety Initiatives. Here’s my reasoning:

2) The proposal I am supporting with Councilmembers Droste, Taplin and Wengraf recommends a total of $3.2 million for new Reimagining Public Safety efforts, compared to the Mayor’s proposal of $5.3 million. Some of the critical investments we propose include:

If you agree that we can take a “Both/And” approach—by restoring police positions and adding new dispatch positions while also continuing the critical work to redesign our public safety system—it is very important that you write an e-mail to the Mayor and City Council today and urge them to support this approach. You can also attend the meeting tonight starting at 6 p.m. to share public comment.

A sample letter is here. Feel free to copy and paste the message below, or use your own words. Click here to start the email, or e-mail council@cityofberkeley.info.

Dear Mayor and Members of the City Council,

It is critical to the safety of all members of our community that we begin to fill vacant positions in the Berkeley Police Department and address further staffing changes using a staffing and beat analysis. In addition, the City should prioritize new dispatch positions, a staff person to coordinate Reimagining Public Safety efforts, and full funding for an Office of Race, Equity, and Diversity to address systemic inequities across all City departments.

These items should be your top priorities. We need a thoughtful, deliberate approach that takes steps toward re-imagining public safety without sacrificing our security, health, and welfare.